What Would Luther Say?

I don’t normally quote the views of a self-confessed atheist and same-sex marriage supporters; however, I think you will be encouraged by what I have to share. We need to keep standing for what we believe in and not be silenced by fear or mediocrity. 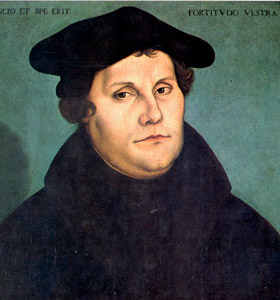 The Reformer Martin Luther (1483-1546), who translated the Bible into German in 1545 and challenged the status quo amongst God’s people throughout his life, encouraged believers to speak up in the face of opposition. He exhorted them in line with Christ’s words in Matthew 10:32 (AMP) “Therefore, everyone who acknowledges Me before men and confesses Me [out of a state of oneness with Me], I will also acknowledge him before My Father Who is in heaven and confess [that I am abiding in] him.”

Luther’s thrust was that even if we are publicly open about just about every other aspect of our Christian faith, but chose to not admit our belief on some single point of doctrine (ie Israel, Abortion, Homosexuality), for fear of what might happen to us if our conviction on that one point became known, we are effectively denying Christ, period.

His quote can be translated roughly thus: “If I profess with the loudest voice and clearest expression every portion of the truth of God’s word except precisely that little point which the world and the devil are at the moment attacking, I am not confessing Christ, no matter however boldly I might say I am confessing Christ” - Martin Luther.

So now to the atheist’s recent comments here in Australia.

Brendan O’Neill recently appeared on the Australian Broadcasting Commission’s program “Q&A”. This is a slightly abridged version of the ‘open letter’ he wrote afterward.

Something terrifying has happened during the past five years: a belief that was held by virtually all human beings for centuries has been rebranded as bigotry, something that may no longer be expressed in polite society. That belief is that marriage is something that occurs between a man and a woman, … the idea that marriage is a union of opposite sexes. This was once seen as a perfectly normal point of view. Now, in the historical blink of an eye, it has been de-normalised, and with such ferocity and speed that anyone still brave enough to express it runs the risk of being ejected from public life. Consider the ABC’s “Q&A” last week, and the furious response to it. The show was unusual from the start because it featured not one but two gay-marriage sceptics: Katy Faust, an American Christian, and me, a godless Brit.

I made the argument that gay marriage now seemed to play the same role God played 200 years ago: anyone who didn’t believe in it hadn’t a hope in hell of getting ahead in public life. There was a chokingly conformist climate, I said, with critics of gay marriage facing demonisation, harassment and, in some cases, expulsion from decent society. Consider Brendan Eich being sacked as chief executive of Mozilla for his belief in traditional marriage. Or all those Christian cake shops beleaguered by gay-rights activists demanding that they make gay cakes. Twenty-first century religious persecution. The response to my comments, on Twitter and in parts of the media, proved my point. It can be summed up as: “How dare you say that the gay-marriage campaign is intolerant, you bigot! Get out of Oz!” “Irony” doesn’t even begin to cover this.

Labor Senator Sam Dastyari, also on the “Q&A” panel, accused Faust of being “hateful” and talking “Christian evangelical claptrap”. Yet all she said was that marriage should be between a man and a woman and children had a right to know both their father and their mother. The demonisation of Faust shows how thoroughly the Christian viewpoint has been turned into a kind of hate speech. Something that was a standard outlook a few years ago is now treated as a pathology. … Then there was Twitter, which went into meltdown over Faust’s and my comments. We’re bigots, haters, scumbags, “vomiting our bile”; we should be sent packing.

…Are Faust’s views really so controversial? Most people would agree that kids should ideally know their biological mum and dad. Indeed, adopted children often seek out their biological parents, believing it will help them make sense of who they are. Maybe they’re bigots, too? … what we have here is the further colonisation of public life by an elite strata of society - the chattering class - and the vigorous expulsion of all those who do not genuflect to their orthodoxies. Whether you’re a climate-change denier, a multiculturalism sceptic or, the lowest of the low, someone who believes in traditional marriage, you’re clearly mad and must be cast out.

The social impact of this illiberal liberalism will be dire. A whole swath of society - the old, the religious, the traditionalist - will feel like moral lepers in their own country, silencing themselves lest they, too, be branded scum. …The current debate over same-sex marriage is one-sided, volatile, even violent. In the movement to open up and move forward, the side that supports the prevailing laws and conventions is increasingly silenced. …

And the gay marriage debate in public forums is in no way balanced - as seen in the abandonment of ads calling for a mature discussion about the likely outcomes of gay marriage by commercial networks and the ferocious put-down of traditional marriage proponent Katy Faust on the “Q&A” program. Considered, conservative, old-fashioned views might be unpopular in the madding crowd, but they are still valid. In a free country, they deserve to be heard. As it stands, those who dare speak in support of the current marriage laws are shouted down before they are fully expressed. Worse, intolerance rains down on those who express those views in ways unprecedented. They are threatened, vilified, verbally roughed up. Isn’t that shades of the very community intolerance that those who support same-sex marriage and racial and religious integration are fighting to dissolve?

The social pressure is stifling. And it is often liberal opinion that is loudest and most raucous. An example from the United States, to which we are wedded culturally for better or worse, illustrates the pickle we have got ourselves into: an appeals court has ordered that a Colorado baker’s religious beliefs were not an acceptable reason for him to refuse to make a wedding cake for a gay couple’s nuptials. This was despite baker Jack Phillips giving evidence that he was not engaging in sexual-orientation discrimination because he was happy to serve gay customers and make them all manner of sweet treats - just not wedding cakes, because his religious convictions meant he believed marriage itself should be between a man and a woman. Interestingly the Colorado court ruled it was OK for three other bakeries to refuse to make cakes with religious scriptures on them.

To be clear: I [Brendan O’Neill] support the legal right for same-sex couples to wed if they wish. It removes outdated divisions, it is right and it is time. And I have fears about the rise in our country of the radical element of Islam, a religion that is cut from a very different cloth than that of our bedrock Judaeo-Christian laws. But I also believe that for us to truly progress, we must be able to have respectful, informed, civilised debate. And for that to occur, we must accept that there are different, heartfelt views and that mature discussion does not mean grinding someone down or forcing them into fearful silence if they do not concur with you. A hundred years ago, English biographer Beatrice Hall summarised French Enlightenment philosopher Voltaire’s notion: “I disapprove of what you say, but I will defend to the death your right to say it.” In matters of massive social and legal change, we would do well to follow that lead.

The Tide will Turn - God is not about to be defeated! Do not shut up!

Source: Compiled from material from the Australian Prayer Network and Creation.com